Newsletter 30 July : Australia’s Response to the Rise of China

Australia’s Response to the Rise of China

Border skirmishes with India, a crackdown on democracy in Hong Kong, a diplomatic row with the US, the promise of recriminations against the UK in regard to their 5G network, and trade threats against Australia. These are all actions taken by China just in the last few weeks. I am frequently asked about my views on the rise of China, and its increasingly aggressive and antagonistic actions in the Indo-Pacific Region. It is clear to me that the rise of China is inevitable and so Australia should welcome this rise, but from a position of strength. A position of strength in terms of our economic status, defence capabilities, and steadfastness in our belief in a free, egalitarian, democratic society.

Since 1978, China has lifted over 850 million people out of poverty with GDP growing almost 10% per year. This astronomical economic growth has improved the lives of millions of people across China. However it is not just the Chinese people that have benefited from this development, numerous countries around the world, including Australia, have benefited from China’s demand for raw materials and other imports to fuel their immense economic expansion. In 2007, China became Australia’s largest two-way trading partner accounting for 13% ($58 billion) of total trade, and China has remained Australia’s largest trading partner. It is fair to say that without the Chinese growth that has occurred over the past few decades, Australia would not be the wealthy and prosperous country it is today.

However, China’s economic growth and transition to a modern nation-state have not been accompanied by a shift towards western democratic values as happened in South Korea, Japan, and Taiwan. Instead, China has grown into a powerful and adversarial nation, with ambitions of challenging the existing world order and establishing itself as the preeminent global superpower of the 21st century. As such, I welcome the inevitable rise of China due to the economic prosperity that it has, and will continue to bring to Australia, however, we must do so from a position of strength. This means an increasing focus on developing a strong National Security Strategy and ensuring we foster our firm friendships and alliances with like-minded nations.

One such alliance that is of the greatest importance to Australia is that with the US. Australia has no better, stronger, or deeper friendship than our one with the United States. We have a shared belief in a rules-based international order, democratic values, and common interests. As I write this, our Minister for Foreign Affairs, Senator the Hon Marise Payne, and our Minister for Defence, Senator the Hon Linda Reynolds CSC, are in Washington DC for the Australia-US Ministerial Consultations (AUSMIN) with their American counterparts. Here they will engage in high-level talks on strategic, foreign, and defence policy. Australia’s commitment to our alliance with the US is demonstrated through our willingness to send two of our highest ranking government ministers overseas amid a global pandemic. We place such a high priority on this relationship that we are prepared to send our Ministers to the US, in the midst of COVID-19, to reinforce the strength of the US-Australia Alliance.

So how do we balance our economic relationship with China, with its increasingly aggressive and antagonistic actions in the Indo-Pacific region? Firstly, it would be foolish to disregard Australia’s economic ties with China, with our total trade reaching a record $235 billion in 2018-19. We have a symbiotic relationship wherein we both benefit. However, Australia must always act in our own national interest. We are a free trading nation but we can never forfeit our values in response to coercion and intimidation from any corporation, organisation, or nation-state. China clearly represents an unprecedented threat to the region. Just last week the Australian government joined our US ally in declaring Chinese claims to the South China Sea to be at odds with the UN convention on the Law of the Sea and hence illegal. US Secretary of State, Mike Pompeo declared last week that “if we bend the knee now, our children’s children may be at the mercy of the Chinese Communist Party”. I echo these sentiments and it is of the utmost importance that we protect our Australian way of life and resist any attempts at coercion through foreign interference. In order to do this, we need a strong National Security Strategy that ensures that all aspects of Australian life and all sectors of our economy are safeguarded against any foreign threat. It really is true that it takes a nation to secure a nation.

My View on the Future Submarine Project

I have often been asked if twelve submarines was the right number to buy. The answer is simple: It depends on what you want to do with them, and that is about strategy.

The recently announced 2020 Strategic Update and Force Structure Plan assists in answering many of the questions about the Attack class submarines: do we need them; why so big; how many; why conventional not nuclear; why not buy cheaper from overseas; are they vulnerable; when will we get them; what about the Collins class; and why so expensive?

To summarise my stance, Australia needs submarines as well as surface ships and aircraft. We need something in the order of 12 large conventional submarines, built to our own specifications, because no off-the-shelf submarine meets the need. Nuclear is simply not an option as it is illegal in Australia at present. The Attack class submarines will be redesigned from a basic French model, as was done with the Collins class. I would rather they be available sooner than the mid 2030’s to 2050’s, however we place a premium on quality defence infrastructure and thus design and construction will take years. However we do have an effective force in the Collins class submarines that must be kept operationally effective.

“The French Submarine”, as its detractors call it, has now become political and some of the comments are shrill. However, as this is the people’s money and future security, we are all entitled to an opinion and I respect that. It is important that we see frequent engagement by political and military leaders to give the Australian people a more open explanation of what is happening with the project.

Following the change in Australia’s defence strategy, Australia now has a forward leaning defence policy designed to shape the environment before conflict breaks out, to deter direct attacks on Australia, and if deterrence fails, to respond forcefully. To implement this new defence strategy, the government has allocated $270b over the next 10 years. The submarines must be seen in this context.

Australia must have submarines big enough to cover the enormous distances in our region or to loiter stealthily for a long time. Don’t forget the distance from our east to west coast is the same as that from London to Istanbul, regardless of whether we might want to deploy submarines even further afield than that. The submarines must also be large enough to carry a range of weapons or even special forces.

Strategically, the role of submarines is to deter conflict by contributing to the operational and tactical defeat of an enemy force. Deterrence has the best chance of being achieved if a significant number of boats with a range of weapons can be deployed at any one time. A potential aggressor is never sure of their number or their location.

The US can offer little support to Australia in the way of leasing submarines as they have commenced the most expensive submarine building program since WW2 that is stretching their industrial capacity. We are on our own.

The number of submarines needed to achieve deterrence for Australia will be at least 9, but 12 would be very good. In the meantime, we have the six Collins class, intended to keep two operationally at sea and the remainder for training or undergoing maintenance. We are doing better than that at present. Given the time frame of the Attack class, the Collins class will continue to operate for a long time to come and will be updated.

Everything in war is vulnerable and there are a wide range of views on the vulnerability and future of submarines and surface ships. Advice is that research “does not suggest to me that the relative difficulty of detecting submarines underwater by comparison with units which have to operate in the atmosphere (ships and planes) is going to diminish.  There is a big difference between getting an indication of a boat in an area and then localising it – and a further difference between localising and achieving tracking quality sufficient to achieve a firing solution”. This indicates that whilst submarines might be detected in a general area, destroying them is not as easy. I also support the need for land based anti-shipping missiles to complement other sea and air defences.

Overly simplified criticism of the Attack class is that we are simply taking the nuclear reactor out of the French boat and replacing it with a diesel. This is untrue as this boat is being designed now as a new vessel, and there are no grounds to say at this stage that it will not be an effective submarine.

I will not enter the argument of whether the costs have increased or we are getting value for money, as that is the responsibility of ministers and officials. I would just say that everything in defence is expensive and we have tried fighting wars with the cheapest option and it does not go well.

This week my shoutout is about the DonateLife Week that runs from Sunday 26 July to Sunday 2 August.

This week all Australians are being urged to discuss organ and tissue donation with their families and to register as a donor with the Australian Organ Donor Register (AODR).  With around 1,700 Australians on the waitlist for a lifesaving transplant right now, and a further 12,000 on dialysis, the demand for donors is incredibly high. 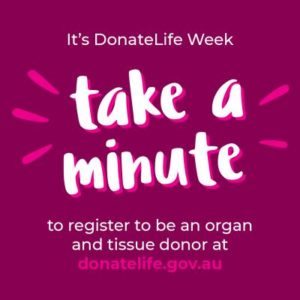 I had the pleasure of speaking at the Australian Defence College’s Strategos Course (Policy and Strategy, Past Present and Future Perspectives) last week.

This course provides a great opportunity for Defence and inter-agency government personnel to extend and refine their strategic knowledge. I enjoyed the lively discussion with course participants and was impressed with their focus on this important topic. 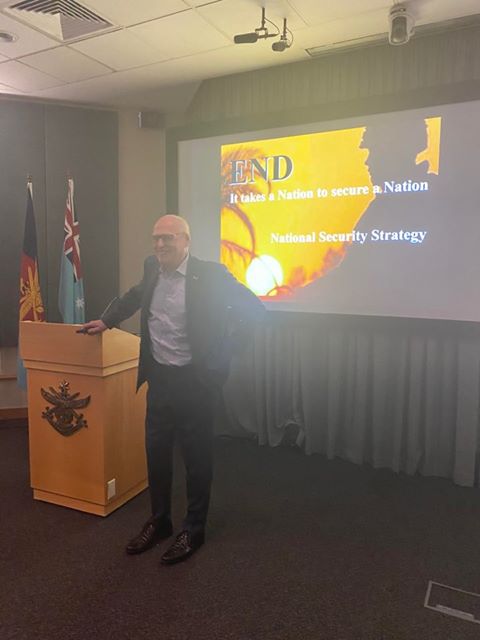 The people of New South Wales have been deeply affected by the fires. Seeing the environment recover around them and the return of native animals is an important part of the recovery process.

This week, nineteen projects have been selected to support bushfire recovery as part of the Morrison Government’s Wildlife and Habitat Bushfire Recovery Grants Program.

These projects are part of a $200 million commitment by the Morrison Government to the long-term recovery of threatened species, native animals and local habitats.

For more information on the work done to support bushfire recovery for wildlife and habitats and a list of the projects, please click here: http://www.environment.gov.au/biodiversity/bushfire-recovery

Last week the Morrison Government announced that the JobKeeper Payment will be extended by six months to 28 March 2021, and the temporary Coronavirus Supplement for those on income support will be extended until 31 December 2020.

The extension of JobKeeper and the Coronavirus Supplement will help Australians get through this crisis and emerge stronger on the other side.  We have already seen how these programs have made a difference to individuals and local businesses in New South Wales by maintaining a connection between employer and employee and assisting those seeking support.

For more information on this announcement please click the links below.

My Media and Parliamentary Activities

My sincere thanks again for all your support.