I often speak about sovereignty as being the objective of a National Security Strategy, and in my Zoom meetings, listeners are often confused about what I mean by sovereignty.

To read my musings on sovereignty, please click here: https://jimmolan.com/article/musings-on-sovereignty/

Over the last few weeks, the social media app known as TikTok has sometimes pushed COVID aside to  dominate media and political discussion about foreign interference, not only in Australia but across the world. The issue of foreign interference through social media has been an issue for many years, especially in relation to attempts to shape elections in a number of countries, and is a much bigger issue than a simple social media App.

TikTok appears to be an application for recording short videos and sharing them, and could be seen as a means of self-expression, venting or just having a joke. TikTok is big business, supposedly it has 100 million users in the US and 1500 employees, projecting it will have $US1bn in revenue this year and $US6bn next year. There are 1.6m users most under 25 years of age in Australia. It is reported that 70% of American TikTok users are aged 13-24.

TikTok is part of the ByteDance group, a China based company but with subsidiaries in various countries such as Australia. It has been banned in India, has been removed from official devices in other countries such as the US and Australia, threats by President Trump to ban it if it is not sold to a non-China company, and other warnings have been issued in many other countries.

All Apps harvest data from us such as our name, address, our likes and dislikes and some of this data is sold to commercial centres who then target individuals with directed advertising. Theoretically we all agree to this in our use of these apps. The most famous abuse of this was the Cambridge Analytica case in 2018, where vast amounts of data was leaked from Facebook without consent and used to focus political advertising.

A big part of the issue with TikTok is who owns the company and where the data is stored. We should of course be aware that China does not allow any of the non-Chinese apps to be used in China which speaks to fairness and reciprocity. Our concern must address China’s 2017 National Intelligence Law which requires all Chinese organisations or citizens to act in accordance with this law. Some views are that spying is a duty for Chinese citizens and companies, while others say that the Intelligence Law does not apply if they operate outside of China. TikTok denies it provides data to the Chinese government.

But that is not the only concern. Concerns have also been expressed about criminality on the app, the exposure of children and young people to paedophiles and other predators, and to attitudes on body image for young girls.

TikTok first became an issue for me when I was made aware of allegations by people who claimed to have reverse engineered the app and were concerned about the amount of personal data that was being surrendered to TiKTok, where that data was stored, how it was being used, or how it could be used in the future.

The Parliament is so concerned with foreign interference that the Senate last year stood up a Select Committee on Foreign Interference through Social Media to inquire into this matter and report before May 2022. Senator Jenny McAllister is the Chair and I am the Deputy Chair, with Senators Kitching and Van as members. The terms of reference are very broad. The last hearing was on 22 June and the first public hearing is on 21 August including international and domestic experts. TikTok has been invited to attend this hearing, and representatives of Facebook, Twitter, Google and WeChat have been invited to appear at a hearing in September.

TikTok has publicly put its case in communications to journalists, politicians and public media and their view should be respected but also examined. TikTok’s boss has said: “The truth is, with tensions rising between some countries, TikTok has unfortunately been caught in the middle, and is being used by some as a political football … I assure you, we’re a social media platform for sharing videos — that’s all.”

I certainly look forward to hearing TikTok at the inquiry. In the meantime it is my advice to be very cautious and to advise children to avoid the app.

From the pale blues and greens of our life-saving health carers’ scrubs to the iconic fluro gold of our magnificent Rural Fire Service brigades, this has been a year when we have become very familiar with the feeling of respect, reassurance and indeed a surge of relief that the presence of certain uniforms evokes.

Over the past fortnight of severe weather conditions it has been the fabulous orange, the ubiquitous orange of our NSW State Emergency Service volunteers that has seemed to have been everywhere at what seemed like all times. Whether the primary responders in flood and storm emergencies, or playing crucial supporting roles to other emergency services such as the NSW Police Force and the Ambulance Service of NSW, the versatility and professionalism of this volunteer based community organisation confirm the standards of excellence within its ranks. In times of crisis it’s easy to forget that our SES units are our neighbours and friends, ordinary community members with an extraordinary breadth of experiences, skills and interests, who share a desire to give back, a commitment to do something special for their community, at a time when it’s most needed.

Behind the slick rescues and fluent operational activities that so effectively meet the challenges and vagaries of our weather, and emergencies of all types, lie hours of dedicated, arduous and specialist training. Community action and corporate volunteers also play crucial roles in liaison and support, ensuring vital information, advice and assistance is provided to residents in areas affected by local risk, and to engage workplaces and other organisations as volunteering partners with the SES.

On Wednesday 12 August I was honoured to accept an invitation from the NSW Minister for Local Government, and Member for South Coast, the Hon Shelley Hancock MP, to accompany her & SES Commissioner Carlene York to visit the SES Nowra Unit and the Shoalhaven Emergency Management Centre in West Nowra. There we met, thanked and spoke to SES volunteers who, from a base of 80 members, have produced over 2000 hours of service for their community during this most recent flooding crisis. I am grateful to the Minister for the opportunity to have met and thanked personally the Commissioner, and to SES volunteer Adam for his informative and detailed briefings, providing an impressive and very clear picture of this phenomenal work undertaken by his Nowra unit.

To all SES volunteers, who have been so very active this year – whether on the front lines or behind the scenes – we salute you and thank you most sincerely.

Mental health has been something many people around Australia have struggled with these past few months. Whether it be from isolation, financial hardship, the loss of a loved one, or simply concern about the future, mental health difficulties have been one of the most serious consequences of the COVID-19 pandemic. It is vitally important that anyone struggling with such difficulties reach out to friends, family, or other support mechanisms. We must all support each other through this incredibly difficult time.

Mental health and suicide prevention remain one of the Governments highest priorities. As such, the Government is investing more in mental health services in order to support Australians in this difficult time. The Australian Government will provide 10 additional Medicare subsidised psychological therapy sessions for people who have used their 10 initial sessions and are in areas subject to restrictions due to the COVID-19 pandemic.

These can be difficult issues to talk about, particularly in the middle of this pandemic. However, it is so important to reach out if you need help. There are numerous resources available to Australians who may need help, some of these are listed below, and a more comprehensive list is available on my website. https://jimmolan.com/2020/08/13/mental-health-support/ 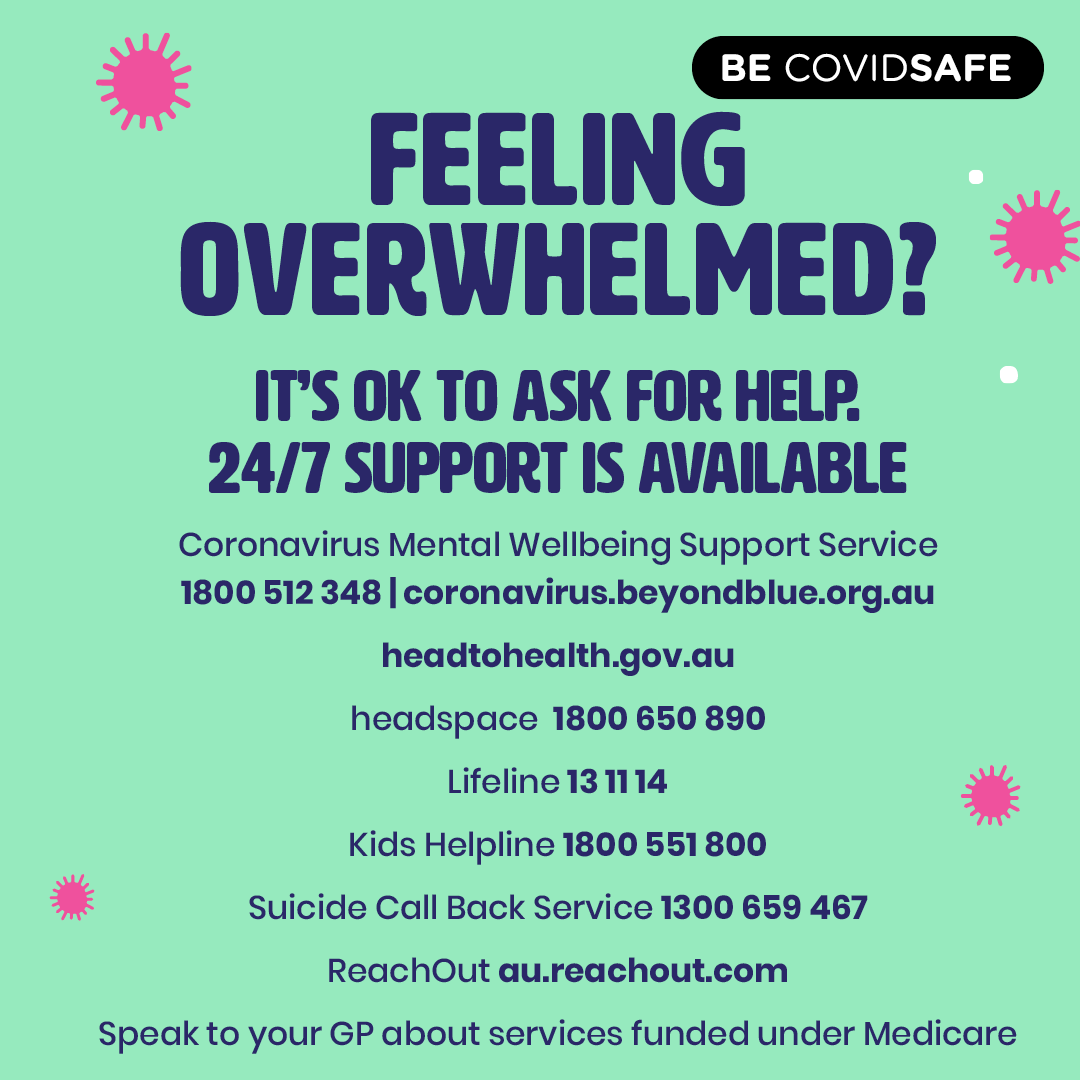 This week, The Governor-General, His Excellency General the Honourable David Hurley AC DSC (Retd), advised that Her Majesty The Queen had given approval for the award of the Victoria Cross for Australia to Ordinary Seaman Edward ‘Teddy’ Sheean, for his actions on 1 December 1942, when he sacrificed his life to save his shipmates during the sinking of the HMAS Armidale.

78 years might have passed since he died but his story will always be part of us.

After the order was given for the crew of the HMAS Armidale to abandon ship, Japanese aircraft repeatedly attacked the Australian sailors who were overboard. Sheean turned back, made for the ship’s Oerlikon anti-aircraft gun, strapped himself in, and returned fire to the Japanese. He fought to the very end.

He chose to save the lives of his shipmates rather than his own.

A week after the sinking, 49 men from the HMAS Armidale were rescued. Many of these men owed their lives to the actions of Teddy Sheean. 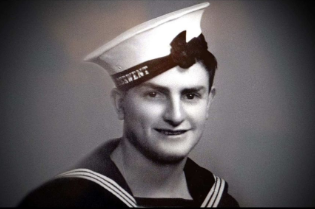 75th Anniversary of the End of the Second World War

It is fitting that we honour our latest Victoria Cross recipient this week. This Saturday, 15 August, we commemorate the 75th Anniversary of the end of the Second World War, when Victory in the Pacific was declared.

To commemorate this important anniversary, the Australian Government Department of Veterans’ Affairs and the Australian War Memorial will be holding a commemorative service on 15 August, with coverage starting from 9.30am.

With pandemic restrictions still in place, this service will be closed to the public, however the service will be broadcast nationally. I hope you will join in me in commemorating the almost one million Australians who served during the Second World War. 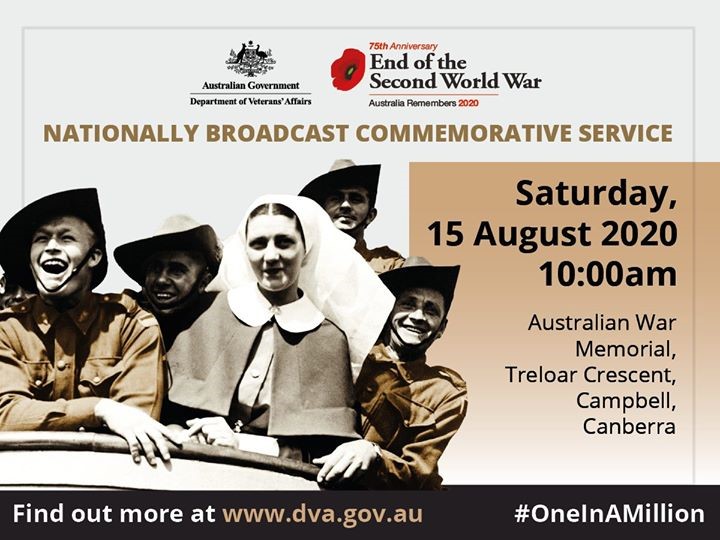 Funding Boost for Local News in Eden-Monaro
Funds have started to flow to 107 regional news outlets across the country as part of the Morrison Government’s $50 million Public Interest News Gathering (PING) program, providing much needed support to regional television, newspaper and radio outlets during COVID-19. The below news outlets in Eden-Monaro will receive funding:

Events Grants to Boost Regional Tourism in Eden-Monaro
The Morrison Government has announced $20,000 and $30,000 in funding for the Welcome to the Snowy Mountains 2021 Concert and The Tilba Festival 2021 respectively, to boost domestic visitors in Eden-Monaro and support the region in response to the summer bushfires and the COVID-19 pandemic.

Funding boost for local news in Gilmore
Funds have started to flow to 107 regional news outlets across the country as part of the Morrison Government’s $50 million Public Interest News Gathering (PING) program, providing much needed support to regional television, newspaper and radio outlets during COVID-19.

My Media and Parliamentary Activities