Newsletter 11 September: No Fuel, No Medicine, No Fertiliser, No Defence: Self-Reliance and You

No Fuel, No Medicine, No Fertiliser, No Defence: Self-Reliance and You

I hope last fortnight’s post on self-reliance gained your interest about this critical topic. In this fortnight’s post,  I’d like to explain how a lack of self-reliance can harm us all. Remember that I draw a distinction between self-reliance and self-sufficiency: the latter is what North Korea tries to achieve (and fails to do so). I am talking about being sure that we can make everything we need in a crisis here in Australia. I also explain how the deterioration in our strategic environment is making self-reliance an even more important for Australia. I’m glad that we have a Government that is ready to face this situation and do something about it.

This fortnight, I would like to focus on Veteran suicide.

I should begin by saying – ‘Rest in Peace’ every soldier, sailor and airman or woman who are mates of ours and who have been mourned, missed, remembered, mentioned, and considered by any of us. But especially to those who have taken their own lives.

Towards the end of last year, I attended the Save Our Heroes Summit run by the Daily Telegraph in Sydney. I was asked to summarize the day for the five mothers that spoke on that day. The Prime Minister had met with them that morning.

How does one summarise perhaps the strongest, fiercest human emotion there is – that of a mothers’ love for her son?  Even more than our love for our mates. There are no words I could have said on that day that could do this justice, and indeed no words that will do this love any better justice than what these five mothers, and others, are doing themselves, now, through their actions.

This meeting and many others have started a much bigger discussion. An all-encompassing discussion about where we have let people down in the past and how we must do better. This has resulted in action.

Sadly war and conflict is part of our life. It is common knowledge that no one comes away from war untouched. I have experienced it. Dan Keighran, Ben Roberts-Smith, James Brown and many other veterans have experienced it. Our Prime Minister feels it, and has shown his feelings by meeting with the mothers on this and on other occasions. I know that he is sincere.

Suicide is not just a military problem. Ten Australians commit suicide each day. However that is no compensation to the mothers that were at this meeting. Our society should accept a very special responsibility for suicides in the Veteran Community because we as a society have put our men and women in a special situation that creates unique stresses.

We all have a responsibility for our mates.

In more clinical terms then, what are we doing about it?

The Department of Veterans Affairs supports 280,000 veterans and their families in this country.

This nation does support its veterans. As James Brown said, if you are going to be a veteran, there is no better place in the world to be one. That support amounts to $11.5bn per year to veterans. There are a range of measures that apply to veterans, all of which are available in detail on the web here. https://www.dva.gov.au/

If I just list them to show the breadth of support, it is an impressive list.
Within that $11.5bn there is:

This is just a list, but it is certainly comprehensive. I am sure it is not perfect, but much has been done.

Probably the most significant change in relation to Veteran Suicide is the one we are now debating and about to pass in the parliament. This bill will establish a powerful new independent National Commissioner for Defence and Veteran Suicide Prevention. The Commissioner will inquire into all suspected veteran and ADF suicides and their causes, and make recommendations for action.

Because this has taken some time to establish, the Prime Minister has commissioned an independent inquiry into past Veteran and Defence suicides to commence immediately and be overseen by an interim National Commissioner.

In addition to the National Commissioner, the Prime Minister has also, some time ago, announced the establishment of a statutory Veteran Family Advocate to represent the views of veterans and their families which will help shape policy and the administration of veteran benefits and support. It was announced recently that Ms Gwen Cherne had been appointed to this position.

Both the National Commissioner and the Veterans Family Advocate are assisted in their work by the National Suicide Prevention Adviser, Ms Christine Morgan, who is working to support the Government’s ‘Towards Zero’ suicides agenda for all Australians.

As I said, we are far from perfect and we realize this. In many ways it comes down to we Veterans who understand the issues by supporting our mates in need.  Perhaps it is as simple as assisting others to find the help or programs that they need.

I have just returned from two days on the beautiful NSW Central Coast. I’d like to thank Lucy Wicks MP and her very helpful team, for the assistance they so readily extended to us in ensuring that we received comprehensive briefs on the important issues in their wonderful community. My thanks also to FEC president Teena McQueen and the members of the Dobell electorate for meeting with me during my visit to Wyong.

One particularly positive update we received was on the Brisbane Water Legacy Village, and this superb residential complex receives my shoutout for this fortnight – the management and staff whose intense focus on ‘affordable care with empathy’ is evident in every service they deliver, every proposal they devise, and every decision they take. I was delighted to personally congratulate Brisbane Water (NSW) Legacy Board Chairman and President, Legatee John George OBE, on their recent BEST grant award.

Plans are progressing for the design of a new six storey retirement village to replace the current accommodation built in the 60s and 70s. A crucial requirement is that building occurs whilst all current residents remain living at the village, and then, as seamlessly as possible, they will transfer across upon completion. Pending local government approval it is hoped that this new development will take place over the next 12-18 months. The affordable rentals in the new village will number 40, all 1 bedroom (a very generous 60sq metres approx.), and will be aimed at Legacy widows. Most of the area’s widows do not qualify for DVA service pensions, and residents will be aged pensioners who pay a small, capped contribution above their aged pension rental support.

The village operates under the NSW Retirement Village Act, but differs from most other centres in that it offers the majority of its accommodation at a low rental rate. Brisbane Water Legacy CEO Peter Lawley explained that even the units available on loan or licence are developed as ‘affordable’ – that is, there’s no compromise in the ‘senior standards’ to which the accommodation is built and finished, but the cost charged to eligible residents is significantly below prevailing market value.

Peter acknowledges that the ability to provide accommodation and the extraordinary support that Brisbane Water Legacy currently manages is due to the empathy and astute financial management – with that imperative of affordability – of past and present Legatees. Welfare and support staff share those values, and, of course, with Legatees extend their personal, domestic, advocacy and chronic disease management assistance to over eleven hundred village residents and families of veterans in the broader community. Village residents confirm that affordability and empathy (and even the occasional hamper!) are significant and much appreciated features of living at Brisbane Water Legacy Village – for that, to all staff, management and Legatees, we say thankyou. 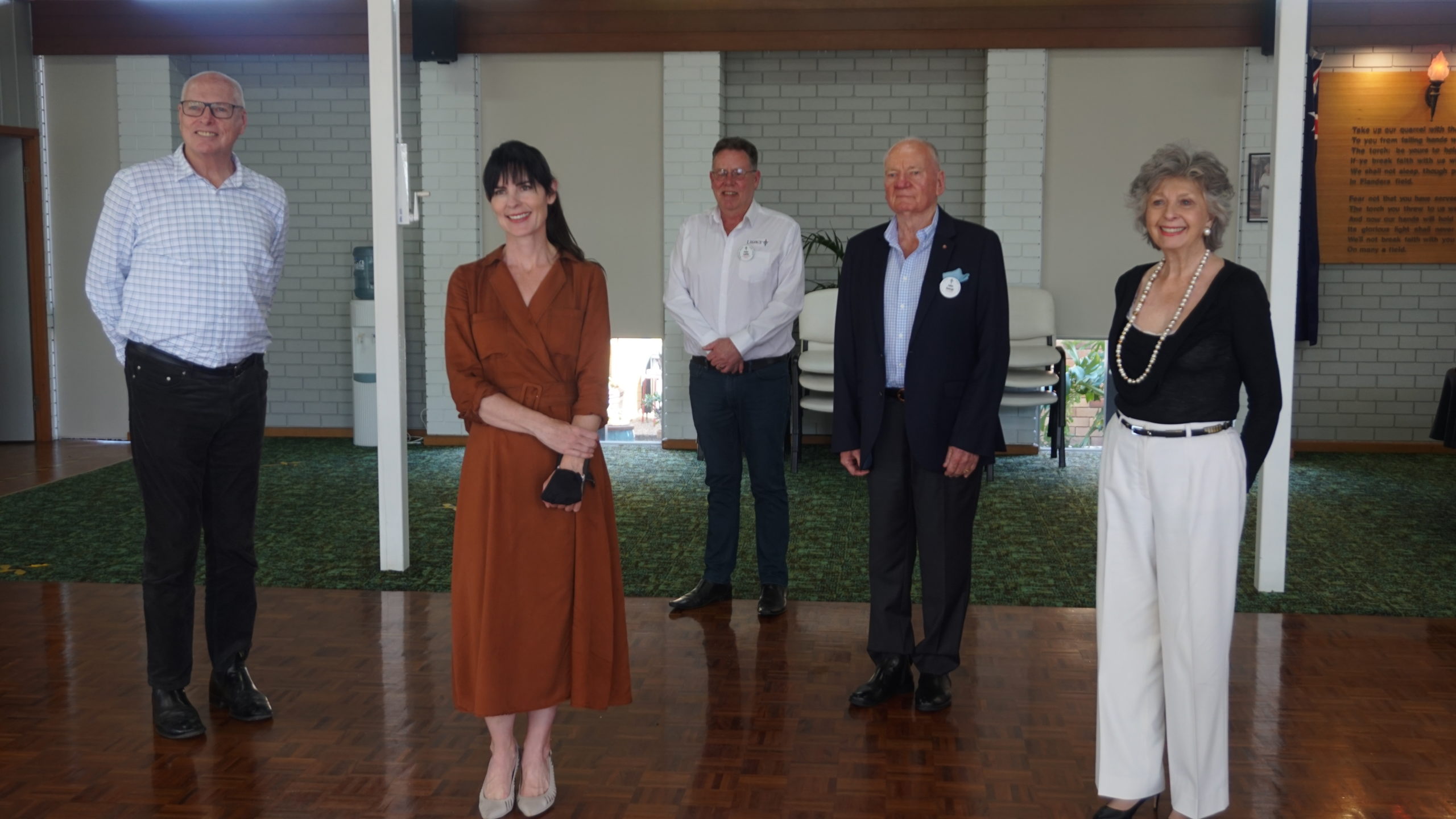 You may not have noticed that the Tasmanian Equal Opportunity Commission has summoned my colleague Senator Claire Chandler to explain herself for saying that: “…women’s sports, women’s toilets and women’s changing rooms are designed for people of the female sex and should remain that way.”

The Commissioner has warned that Claire’s words could be considered ‘offensive, intimidating, insulting, ridiculing or humiliating.’

I do not agree that quasi-judicial powers should be used in this manner against my colleagues for common sense and truth.